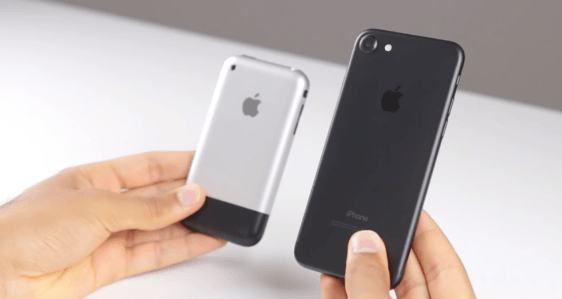 The iPhone 7 came out a few weeks ago in this video you can see it being compared to the 2G which is Apples first iPhone. You can see that the iPhones are different in size straight away as the iPhone 7 is a lot larger but also thinner than the iPhone 2G.

The iPhone 2G had a ARM 11 processor, 128 MB of RAM & you could choose from 4, 8 or 16 GB of storage. In contrast to this, the iPhone 7 has the A10 fusion processor, 2GB of RAM, 32, 128 or 256 GB of storage. You can  see how different they are in terms of specifications as well as the design. The iPhone 7 is 120x faster than the first iPhone which makes it one of the fastest iPhones around. The original iPhone still works well even using it today which shows that from the beginning Apple knew what they were doing when it came to smartphones.